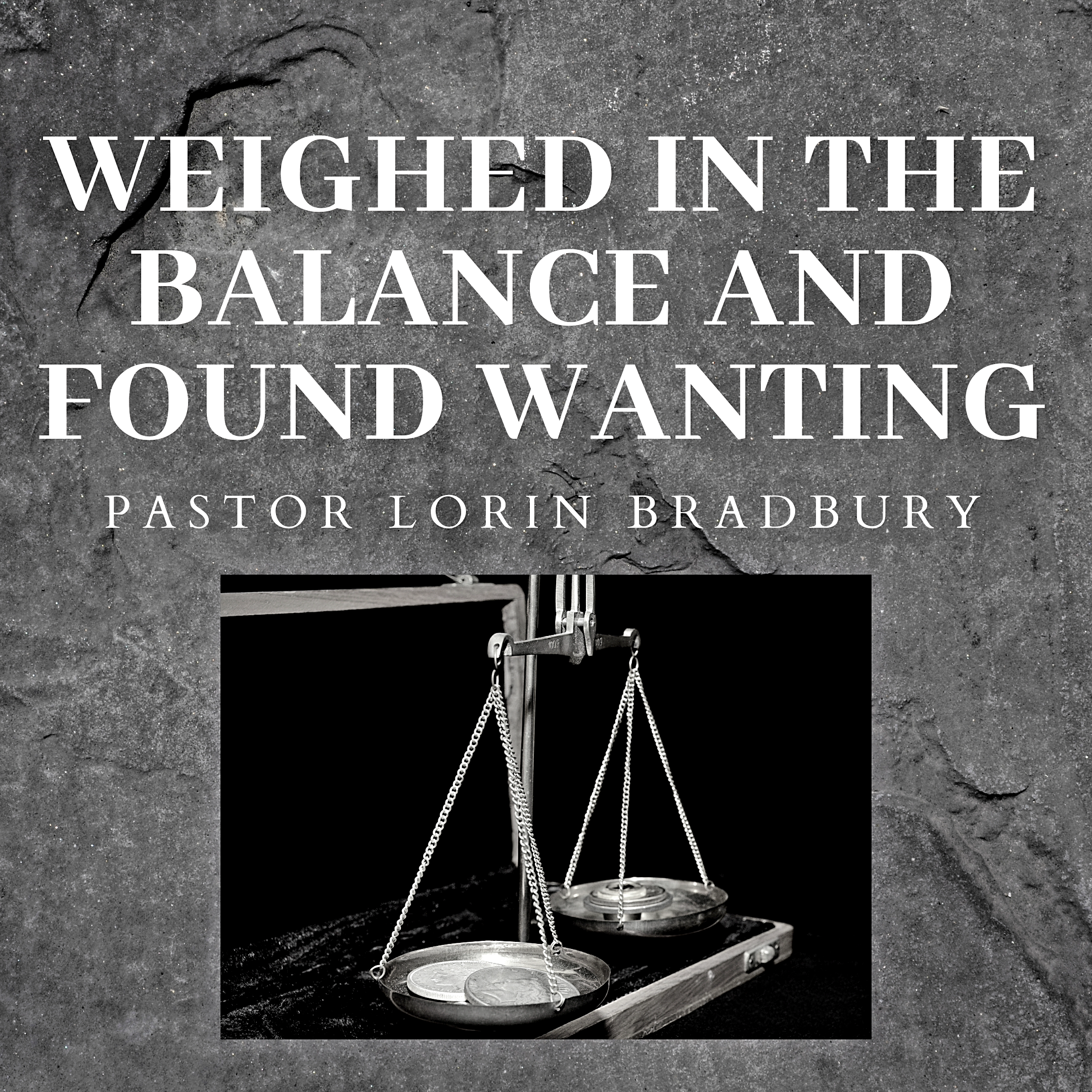 Pastor Lorin Bradbury will preach on “Weighed in the Balance and Found Wanting” Sunday morning at 11:00AM at the Bethel United Pentecostal Church, Facebook LIVE and airing on KJNR 91.9FM. (9/27/20)

5 Suddenly the fingers of a human hand appeared and wrote on the plaster of the wall, near the lampstand in the royal palace.  The king watched the hand as it wrote.  6 His face turned pale and he was so frightened that his knees knocked together and his legs gave way.

17 Then Daniel answered the king, “You may keep your gifts for yourself and give your rewards to someone else.  Nevertheless, I will read the writing for the king and tell him what it means.

18 “O king, the Most High God gave your father Nebuchadnezzar sovereignty and greatness and glory and splendor.  19 Because of the high position he gave him, all the peoples and nations and men of every language dreaded and feared him.  Those the king wanted to put to death, he put to death; those he wanted to spare, he spared; those he wanted to promote, he promoted; and those he wanted to humble, he humbled.  20 But when his heart became arrogant and hardened with pride, he was deposed from his royal throne and stripped of his glory.  21 He was driven away from people and given the mind of an animal; he lived with the wild donkeys and ate grass like cattle; and his body was drenched with the dew of heaven, until he acknowledged that the Most High God is sovereign over the kingdoms of men and sets over them anyone he wishes.

22 “But you his son, O Belshazzar, have not humbled yourself, though you knew all this.  23 Instead, you have set yourself up against the Lord of heaven.  You had the goblets from his temple brought to you, and you and your nobles, your wives and your concubines drank wine from them.  You praised the gods of silver and gold, of bronze, iron, wood and stone, which cannot see or hear or understand.  But you did not honor the God who holds in his hand your life and all your ways.  24 Therefore he sent the hand that wrote the inscription.

25 “This is the inscription that was written:  mene, mene, tekel, parsin

26 “This is what these words mean:  Mene: God has numbered the days of your reign and brought it to an end.  27 Tekel: You have been weighed on the scales and found wanting.  28 Peres: Your kingdom is divided and given to the Medes and Persians.”

29 Then at Belshazzar’s command, Daniel was clothed in purple, a gold chain was placed around his neck, and he was proclaimed the third highest ruler in the kingdom.

30 That very night Belshazzar, king of the Babylonians, was slain, 31 and Darius the Mede took over the kingdom, at the age of sixty-two.

Learn from the past.
When Jesus comes, don’t be found wanting.
Today is the day to get ready for the coming of the Lord.